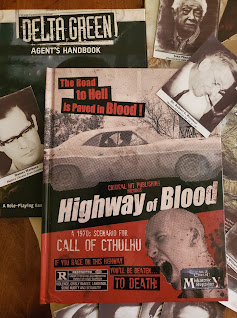 Highway of Blood by Critical Hit Publishing is a third-party product made for Call of Cthulhu 7th edition. I recently ran it with Delta Green and it worked out great.

Highway of Blood is set in West Texas in 1975, it does a great job of capturing the feel of the 1970's. There are several suggestions for 70's metal and rock songs to be played at certain points throughout the adventure, which I thought was quite awesome.

I used Delta Green the Role Playing game to run it. In 1975 Delta Green is in its cowboy era, running illegally with no support, so it fit perfectly with this game. Highway for Blood does provide several interesting plot hooks for different groups of players, and 2 different sets of pre-gens. Also dozens of handouts and NPC portraits, which I printed out on cardstock to pass out to the players like photographs, which was a nice touch.

There is a cool chase scene on the highway, with chase mechanics and vehicle stats. There are Desert hazards such as heat stroke, venomous critters, new spells, creatures and more. There is a lot packed into this adventure, it's more a mini sandbox setting. There is plenty to do and explore, my group played four sessions and did not cover everything, so I could easily run it for another group and have a completely different experience.

The physical book is pretty great too. The paper quality, the art, layout, writing, all top notch stuff. You can pick it up on drivethru. 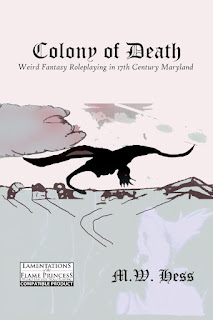 Need some German Hex Magic for your Lamentations of the Flame Princesses game? Colony of Death has it!
Excerpt: "Inside, the church is very plain, with two rows of pews leading up to a simple pulpit, where sits a large illuminated Bible. The Bible is written in German and contains the Cleric spells: Augury, Cure Disease, Cure Light Wounds, Delay Poison, Protection from Evil, and Remove Curse. The spells in this Bible can be used by non-Clerics, if the reader can read German, is not chaotic, and prays for 1 hour per level of the spell being cast. This does not remove the spell from the Bible like it would for a scroll."
Get your print copy here: https://www.lulu.com/en/us/shop/mark-hess/colony-of-death/paperback/product-njy6d4.html?page=1&pageSize=4
Check out my other works here: https://www.drivethrurpg.com/browse/pub/16830/Mark-Hess
Posted by Hexelis at 1:47 PM No comments: