Summer of Lament, the Doomed Ones LotFP campaign

This is just my notes from the crazy ass Lamentations campaign we played this summer. Some people found it hard to believe we played so many modules in just 6 months, I find it hard to believe myself. We played twice a week sometimes, we were playing episodic I was advancing the timeline 1d6 years between modules, and my players are young and like to burn through shit.

So anyway some of you might enjoy reading this. 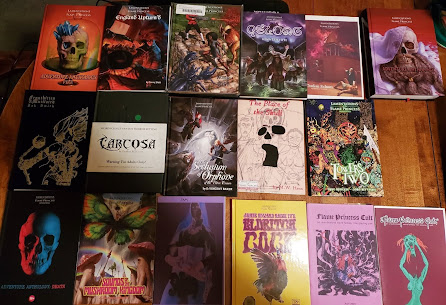 The Doomed Ones - LotFP Campaign – March-August 2021

-Weird Magic is in use (Vaginas Are Magic and Eldritch Cock)

1. Doom Cave of the Crystal-Headed Children

-New Trends in Armor. Chainmail and plate are no longer available for sale, but buff coats, Pikeman’s armor, full armor, etc. are.

3. The God that Crawls

4. The God that Crawls conclusion

-Fashion - Ridiculously large hats and general foppery come into vogue. Any PC wanting entrance into polite society must spend at least 15+5d10sp on a new wardrobe.

The City of London suffers a devastating plague with 75% fatality rate. King James contracts it and dies. Parliament takes temporary control, until James’ son Henry Frederick reaches the age of 18 to assume the crown.

At the age of 18 Prince Henry is set to take the throne, when he suddenly takes ill and dies of Typhoid Fever. England is still without a king and under Parliamentary rule.

-Wheelock firearms including Arquebuses, muskets and pistols are now available.

8. World of the Lost: Khirima

9. World of the Lost, part II: The Plateau

10. World of the Lost, part III: The Temple of Ages That Are Not

Khirima is overrun with dinosaurs, plasmics and pterians. Over the coming months they spread further into Nigeria. By 1614 they will be spread throughout greater Africa.

-Dwarves return to the Mother. All NPC dwarves retreat from the sunlit realms, never to be seen on the surface again. No new dwarf PCs allowed.

October 1620, off the coast of Iceland – Hanz, Christian, Gilbert, Laila

Charles I ascends the throne of England. The Nilfungr have gone to war with England, who has been without a king, until the young Charles I takes to the throne and rallies the people to war.

-Artifacts decay. All non-potion magic items now have a 20% chance of being drained of magic after each use. Wands, etc., can no longer be recharged.

15. Weird New World. Many seek the Northwest Passage, and the entrance to the Hollow Earth, which the Nilfungr revealed to the World. Hanz and his group arrive at Trading Post Talon. The party waits until August to venture out with the summer thaw. They find the Death Shrine.

17. Hammers of the God. They got the Elfbane.

21. F&M 4. Into the Dim Fortress. They learned that the End is coming, and were advised to leave Earth if at all possible. They killed the Noctambulant. They spoke to King Ovv. They saw Nidhoggr. Many of the Arsonists were killed.

-Age of dueling begins. Great and medium weapons are out, rapiers are in. Furthermore, 1 in 6 city encounters are now with some fool (fighter level d4-1) who demands to cross swords.

Back on Earth, life continues.

-No more Vancian Magic, existing M-Us will gain slots upon leveling, but must gain spells from spellbooks, scrolls, or other M-Us, all of which have become extremely rare.

-No more Physik, no more Clerics or Magic-Users

-Anyone can use Carcosan Rituals

23. Carcosa/The Seclusium of Jontof. The party has been living with a tribe of White Men for nearly a year. They have picked up the local language and learned some about the harsh world they now call home. They buy a treasure map and follow it, they find a chest of gems and kill a spawn of Shub-Niggurath. They scout out the Seclusium of Jontof, Bearer of the Seven Potencies. They meet the apprentice posing as Jontof. He agrees to ally with them and tells them to seize the Place of the Skull. Timmy has a prophetic dream of the Fungal Gardens.

24. The Place of the Skull. They party seek to loot the ancient mysterious site. They arrive and infiltrate the site. They manage to kill Ghopiab and Skullface. Ghopiab is now undead and under Bert’s control.

25. The Place of the Skull part II. They continue clearing out the site, apparently there’s a captured princess nearby. They find her and finish off the minions. In the crystal chamber below they unlock the secret arsenal of the ancients. They agree to return the princess to her kingdom.

They now have dino mounts and the Battle Ram tank.

26. Funeral for a Friend. On their way to Oras Kuhl they battle a village of Dolm Men, they encounter 8 Jale Sorcerers who demand a sacrifice. The group offers up Tor, the mutant slave who helped them escape. They fought a Spawn of Shubniggurath on the shores of Lake Hali, it killed Laila and Olivia. They finally arrive at Oras Kuhl where they are greeted as heroes for returning Princess Freya. There they bury their friends Hikiel, Laila and Olivia in the city of Oras Kuhl, a hero’s funeral. King Velkor rewards them with 20,000sp and lets them stay. They stay for the next 13 days while Garvik transcribes a scroll.

28. Fungal Gardens Part II. They find deep ones, ally with the Bone sorcerer and convince the Red Man’s army to go away. Stay till day 30

29. Towers Two. The group travels to Hune. They clear out the Sarkas Clan. Ended abruptly, did not finish.